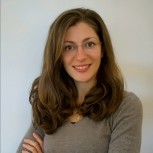 Christelle's recent work involves the development of improved and robust guidelines for the design of monopile foundations for offshore wind applications, addressing both ultimate limit state and the response to long-term cyclic loading. Her research projects were conducted in close collaboration with offshore wind industries, such as EDF and Orsted.

Christelle's research has been largely involved with capturing permanent deformations caused by repeated cyclic loads applied to a mechanical system. This phenomenon is called ratcheting, and - in the case of offshore wind foundations - can be induced by repeated wave and wind loads on the offshore wind mast. Christelle's work involved the development and calibration of a constitutive model - HARM (Hyperplastic Accelerated Ratcheting Model) - that captures this behaviour in a simple yet rigorous way.

Christelle Abadie is a University Lecturer in Civil Engineering. Prior to joining the University of Cambridge, she was a research assistant at the University of Oxford from 2016 to 2018. She received her DPhil (PhD) from the same institution in 2016 and her undergraduate degree from the French Engineering School ENSTA ParisTech.