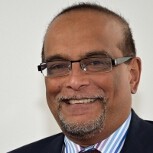 Professor Amaratunga’s research is in the broad area of materials and technologies for electrical energy and power. It intersects electrical and electronic engineering with chemistry, physics, materials science and information systems.

An example would be a solar cell. Here the physics of optics, photonics and solid state electronics are realized in a material the properties of which are determined by its chemical elements, their bonding and long range order. The application however is as an optoelectronic battery ( cell), connected to other similar batteries ( panels) , which in turn are connected together to feed power into the electrical grid through ultra efficient DC-AC conversion/inversion using power electronics. Professor Amaratunga’s research spans the whole spectrum of areas from nanophotonics for enhancing light coupling into solar cells to solar electricity generation and its intelligent connection to the electrical power system to maximise benefit.

Electrochemical batteries and supercapacitors used as energy/power sources, another subject of interest, engender a similar spectrum of research areas.

Nanomaterials and nanotechnology in the context of solar cells and energy storage devices is a research focus.

Operation of chemical power plant loads and the electrical grid - Integrated Chemical and Electrical System Operation (ICESO) is one of the 4 research projects within the Cambridge Centre for Carbon Reduction in Chemical Technologies (C4T) which is part of the Campus for Research Excellence and Technical Entrepreneurship (CREATE) in Singapore. It aims to understand at a system level how chemical processing plants can draw from and feed power into the grid, so as to reduce overall energy consumption while providing stable and reliable electrical power.

Electrochemical and dielectric ultracapacitors for energy storage - High power (fast energy release) and high stored energy capacitors. Specific energy stored close to that of a Li battery but with a charge/discharge rate (power) similar to a dielectric capacitor. A combination of solid state ionics and electronics in nanocomposites and nanostructured carbon electrodes are being explored.

Professor Amaratunga is a founder of five technology start-up companies: CamSemi and Enecsys in the area of electronics which have attracted in excess of $120M in venture capital funding and have class leading commercial products in the market, Nanoinstruments in the area of nanotechnology which was acquired by Aixtron AG in 2007 and WindTechnologies and Camutronics which are at earlier stages of product development.