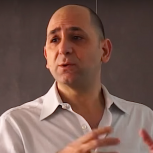 Professor of Information and Communications

Professor Kontoyiannis primarily works on problems in information theory, applied probability and statistics. In information theory he is interested in understanding the fundamental (best achievable) performance limits of modern communications systems, given today’s practical technological constraints. His relevant work includes applications ranging from neuroscience to finance, and from signal processing to bioinformatics. In probability his main focus is the analysis of asymptotic, non-asymptotic, and spectral properties of general Markov chains. His primary interest here is in answering basic questions arising from important problems in applied areas including wireless networks, simulation, and learning algorithms. In statistics, his main area of interest is in the development of Bayesian methodological tools for model selection, inference, and machine learning tasks.

Professor Kontoyiannis has served on the editorial board of the American Mathematical Society's Quarterly of Applied Mathematics, he is currently serving a third term as an associate editor for the IEEE Transactions on Information Theory, for which he also served as interim Editor-in-Chief. He has served on the editorial boards of Springer-Verlag's Acta Applicandae Mathematicae, Springer-Verlag’s Lecture Notes in Mathematics book series, and the online journal Entropy. He has also served as chair or member of the program committee of numerous IEEE conferences.

Kontoyiannis’ research has been funded by the National Science Foundation, the European Union, Greek national funds, the European Research Council, and numerous other national and international bodies. He has also been involved in consulting work for companies in the financial, medical, and high-tech industries.