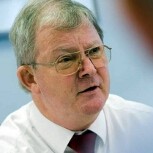 Energy in buildings, retrofit at the urban scale.

Work with many companies involved in electronic device developments.

What climate science findings are sufficiently robust to guide policy decisions that will have outcomes lasting 50 years, as in infrastructure renewal?

Professor Michael Kelly is the Prince Philip Professor of Technology in the University of Cambridge since 2002, and a Professorial Fellow at Trinity Hall.  Since 2006 he has been a Non-executive Director of the Laird plc.

He studied Mathematics and Physics to MSc (1971) level at Victoria University of Wellington, and completed a PhD (1974) in solid state physics at the University of Cambridge where he continued post-doctoral work until 1981 when he joined the GEC Hirst Research Centre.  While there he and his team developed, from concept to product, two new generation families of microwave devices that went, and one is still, in production with E2V Technologies in Lincoln.  From 1992-2002 he was Professor of Physics and Electronics at the University of Surrey, including a term as Head of the School of Electronics and Physical Sciences.  His research since 1990 has concentrated on the technology issues germane to the practical large-volume low-cost manufacture of the most advanced electronic devices.  During 2003-5, we was the Executive Director of the Cambridge-MIT Institute, an £80M project which brought together academics from Cambridge and MIT to work on research, education and industrial outreach for the benefit of the UK economy.  He has also served as Chief Scientific Advisor to the Department for Communities and Local Government during 2006-9 where he focused on energy demand reduction in the built environment.