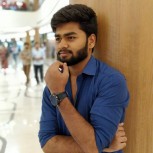 During his studies, Tharun represented great societies and served in many roles. He was the Honorary lifetime member at Tau Beta Pi Chapter for Engineers and acted as the Vice president of Eta Kappa Nu Honor Society for Electrical Engineers. In the meantime, Tharun worked as a lead tutor at University tutorial services at Binghamton University. His scientific interests include Bio Electronics especially Deep Brain Stimulation. He is also passionate about photonics and high speed communication technologies