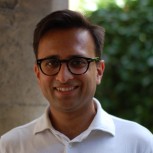 Professor of Acoustics and Biomedical Technology

Anurag is the Head of Fluids Group and the Acoustics lab in the Engineering Department at the University of Cambridge. He is a Professor in Acoustics and Biomedical Technology, Dhruv Sawhney Fellow of Emmanuel College and The Cambridge Philosophical Society, and a co-founder and CSO of Biophonics. He is an Enterprise Champion and Diversity Champion for the School of Technology. His research interests are in the field of acoustics and aerodynamics of aerospace, domestic appliances and biomedical applications. His collaborators include Rolls-Royce, General Electric, Boeing, Mitsubishi Heavy Industries, JCB, Dyson, and Addenbrookes, Papworth, Imperial, Birmingham, Guy’s and St Thomas, King’s and John Radcliffe Hospitals.