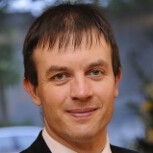 In recent years, metal oxides have emerged as a viable alternative to amorphous silicon in thin film transistors for display applications. This is due to their significantly higher carrier mobility and potentially improved stability. Furthermore, these materials are more suited to plastic substrates, and so open up a range of new plastic electronics applications. Our work in this field, much of which has been performed through the Cambridge Integrated Knowledge Centre, has focussed on two general themes. The first is manufacturability. Magnetron sputtering, which is most commonly used to deposit these materials, suffers from problems in terms of reproducibility and scale-up. We have been investigating the use of other deposition technologies, including a High Target Utilisation (HiTUS) sputtering system, which are more suited to scale-up. Using the HiTUS system we have demonstrated a new phase of amorphous hafnium oxide - cubic-like amorphous hafnium oxide (ca-HfOx) - which has a fully amorphous structure and a dielectric constant of over 30, and is a significant improvement over the state-of-the-art. These materials have been incorporated into a variety of devices.

Our work on acoustic wave sensors is based on both surface acoustic wave (SAW) devices and film bulk acoustic resonator (FBAR) devices. In both cases, we most commonly use zinc oxide that is sputtered with a very low stress (<100 MPa) using our HiTUS sputtering system (see above). This has allowed us to produce FABR devices with operating frequencies between 1 and 2 GHz and with a Q-factor of ~1500. These devices are being developed mainly for biosensing applications.

We have also started to use our metal oxide materials for solar cells. In particular, we can produce a high mobility cuprous oxide, which is p-type and has a Hall mobility of ~10 cm2 V-1 s-1. Cuprous oxide has a band gap ~2 eV, and so is ideal for the absorber layer in solar cells.

Andrew Flewitt received the B.Sc. degree in physics from the University of Birmingham, Birmingham, U.K., in 1994 and the Ph.D. degree in scanning tunneling microscopy of amorphous silicon from the University of Cambridge, Cambridge, U.K., in 1998. Following this, he was a Research Associate studying the low-temperature growth of silicon-based materials in the Engineering Department, University of Cambridge. He was appointed to a Lectureship in the same Department in 2002. Since 2009, he has held the position of University Reader in Electronic Engineering. His research interests span a broad range of large area electronics and related fields, including thin film transistors and MEMS devices. Dr. Flewitt is a Chartered Engineer and Chartered Physicist and a Member of the Institute of Physics and the Institution of Engineering and Technology.