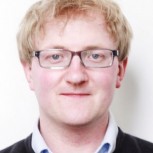 Clément Courouve grew up in a small, wine-producing village in the Moselle valley, France. He is a graduate of the University of Metz, where he was a language student. With a particular interest in linguistics, grammar and translation, he went on to study for a Master's degree before spending two years abroad as a French language assistant. In the meantime, he passed the French competitive examination to become a language teacher and subsequently taught in the French education system for a couple of years, before joining the University of Cambridge in 2011 as a teacher of French.

Clément also teaches for the Department of French in the University's Faculty of Modern and Medieval Languages and Linguistics (MMLL) and supervises undergraduate linguists at Fitzwilliam and Murray Edwards College. In 2017, he was appointed Special Supervisor of Studies in French at Fitzwilliam College.

Since the start of the academic year 2018/2019, he also teaches specialist and general language courses in the Cambridge University Language Programme (CULP) at the Language Centre.