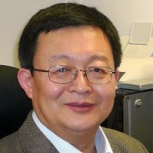 Nanjing Professor of Technology and Innovation

He is also a professorial fellow and Director of Studies in Engineering in Selwyn College, a Chartered Engineer, a Fellow of the Institution of Engineering and Technology, a Chartered Physicist and a Fellow of the Institute of Physics. He holds professorships from a number of universities in China and the position of Honorary Dean of School of International Innovation at Shandong University. He was a member of staff in the Theoretical Physics Group of the Institute of Physics, Chinese Academy of Sciences, in Beijing from 1986 to 1991. Subsequently he moved to England, working as a Research Fellow at Warwick University until 1998, and completed his Doctorate in Physics in 1994. Between 1994 and 1995, he was a visiting scholar at the University of Antwerp in collaboration with IMEC at Louven. He joined the Department of Engineering at University of Cambridge in 1998 and worked in the Cambridge Research Laboratory of Epson between 1999-2008, where he was the Executive Researcher.

His research activity has been in the areas of both theoretical and experimental condensed matter physics, semiconductor devices and materials, nanostructures and properties, ferroelectrics non-volatile memory devices, organic electronics and inkjet fabrication process. His current research interests are in: