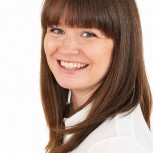 Gemma’s research interests are in non-invasive optical neuromonitoring techniques. She develops diffuse optical devices to monitor brain metabolism in areas which traditional brain monitoring can’t, such as the intensive care unit or in a real-world environment. Her primary focus had been developing broadband near-infrared spectroscopy (bNIRS) techniques to monitor a metabolic enzyme, cytochrome-c-oxidase [Bale et al., Journal of Biomedical Optics, 2016]. Cytochrome-c-oxidase is the terminal electron acceptor of the electron transport chain, which is the final stage of oxidative metabolism within the mitochondria. Its near-infrared optical properties are dependent on its oxidation state, hence it is possible to monitor electron transport within the mitochondria using bNIRS. Cellular metabolism is an important measurement for a range of medical conditions.

Gemma has pioneered this technique in the neonatal intensive care unit and has shown the clinical promise of the measurements. She has also developed miniature, portable devices which are being used around the world in a range of different scenarios, from paediatric surgery to psychiatric wards. The aim of Gemma’s research is to translate biomedical optics measurements into clinical practice.

Gemma studied Physics (BSc) at Imperial College London where she became interested in using optics for medical applications. To pursue this, she undertook a Masters in Photonics Systems Development at UCL and the University of Cambridge, and discovered near-infrared spectroscopy (NIRS) – a non-invasive technique that can monitor the brain.

During her PhD, she developed a broadband NIRS device to monitor metabolism (via cytochrome-c-oxidase [Bale et al., Journal of Biomedical Optics, 2016]) in baby brain injury non-invasively [Bale et al., Biomedical Optics Express, 2014]. By analysing the data obtained by this instrument, Gemma demonstrated that NIRS measurements can diagnose brain injury during intensive care, days earlier than MRI [Bale, Journal Cerebral Blood Flow and Metabolism, 2018]. She further led the development of miniature broadband NIRS devices which are being used internationally to monitor metabolism in a range of cerebral conditions.

Since completing her PhD in 2016, she has made key advances in combining the principles of NIRS and diffuse correlation spectroscopy (DCS) to measure cerebral blood flow and metabolism simultaneously and continuously in a single instrument for the first time. She then demonstrated this device on animal models of brain injury [Rajaram, Bale, et al., Biomedical Optics Express, 2017] before translation to the intensive care unit this year. To undertake this development she brought new techniques to the UK as a result of working as a visiting scientist at University of Western Ontario, Canada (2016-2017) and Institute of Photonic Sciences, Barcelona (2019).

Throughout her career, Gemma has been passionate about communicating science outside of academia. During her PhD, she was awarded the UCL Provost’s Engineering Engager of the Year (2015) award for her work in communicating science to the public in many forms – from stand-up comedy to teaching in schools. Post-PhD, she led an award-winning public engagement platform called MetaboLight (www.metabolight.org). In 2018, she undertook a Media Fellowship – working as a science journalist for BBC Radio 2, and in the same year was awarded the Isambard Kingdom Brunel Award for Engineering, Technology and Industry by the British Science Association, as part of its prestigious Award Lecture series.