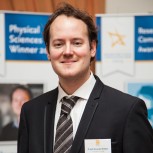 Jack Alexander-Webber holds a Royal Society Dorothy Hodgkin Research Fellowship. He has previously held a Research Fellowship from the Royal Commission for the Exhibition of 1851 and a Junior Research Fellowship of Churchill College. He graduated from Royal Holloway, University of London in 2009 with an MSci in Physics. After a summer studentship working for the National Physical Laboratory he began his DPhil in the group of Prof Robin Nicholas at the University of Oxford. His doctoral research was on the properties of low-dimensional nanostructures such as graphene, carbon nanotubes and III-V semiconductors with a particular focus on high magnetic field effects studied both in Oxford and at the European Magnetic Field Laboratory facilities in Grenoble and Toulouse. After completing his DPhil, Jack undertook an EPSRC Doctoral Prize fellowship at Oxford. His current research interests lie in exploring the nature of low-dimensional nanomaterials such as graphene, 2D semiconductors, and semiconductor nanowires and exploiting their exceptional properties for electronic and optoelectronic applications.