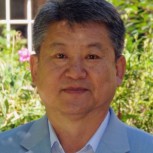 Professor Jong Min Kim was formerly Senior Vice President and Vice President in Samsung Electronics Corporate R&D Centre, Korea for 13 years. Now, he is Professor of Electrical Engineering of Department of Engineering at University of Cambridge. He was Chair of Electrical Engineering at University of Oxford from 2012-2015. Professor Kim had previously held a variety of senior technology positions at the Samsung Group including Display, Materials, Energy and Electronics research/developments. Professor Kim had managed several tens of millions of dollars per annum for major projects in Samsung for 17 years. His research is described in more than 300 journal papers (including 8 Nature/Science, and Nature family journals), 250 publications on the Technical Digest and proceedings with around 100 keynote/invited speech at major international conference, and 253 patents (153 international patents). He received a number of awards: Best Paper Award, the Gold Prize Award by Samsung Group Chair, Prime Minister Awards (2001), Awards by Minister of Science (2000), and recently Awards by Minister of Knowledge/Economy (2012) from the Korean government. He was responsible for a number of world first inventions: carbon nanotube (reported variously in Science, Nature, etc. One paper is with more than 1,000 citation); transparent and flexible graphene electrodes (Nature 2009, with more than 3,000 citations) and quantum dot based LEDs and displays (Nature Photonics, Cover Article, 2009 and 2011, Nature Comm’13), LED on glass (Nature Photonics, Cover Article, 2011), CNT network Transistors ( Science 2008 and Nature Communications 2011), and many others. Amongst his professional achievements Professor Kim was Chair, Samsung Group Technology Conference (>1,000 papers, 2004-06, 2010-11); Member, Evaluation Committee for R&D Centres of Seoul National University (2008-9); Int. Advisory Board Member, Rus Nano Prize in Russia (2007-present), and technical committee of IEEE Int. Conference (IVNC, MTT), LOPE-C, ICFPE, etc. He had managed many high technology trans-national projects including the EU project-Takoff  (FP 6 project-IST2000-28519, €10.5 m), 8 million dollars project on Creative Research by Korean Government, and more outside of Samsung: Stanford University (2003-2011), Dupont R&D Centre (2001-2006), 3M R&D Centre (2004-2010), Toray (2004-2011), Russian Academy of Science( 1995~2011), the Chinese Academy of Sciences (2003-2010) and many academia. He has been leading EC ERC Advanced Grant since 2014 and many other projects.

He had organised his selected publications in three groups.

His work on Quantum Dot materials and devices began in around 2002 when he turned the research subject from development of CL and/or PL phosphors to research on EL devices and various convergence technologies related to solar cells and batteries. Based on nano-phosphor technology, he had found various new QD materials, structures and devices.

His interests in nano carbon such as CNTs and Graphene and their applications go back to 1998. As an ideal electron emitter, CNTs have been studied at the early stage of my nanocarbon related work from 1998 to 2004 then he had published more than 100 papers on nanocarbons and their applications. Nano carbon has been one of key subjects over his research career and it is still one of major focus of his group’s work.

Display is one of another research bases. From early 1990’s, he had developed a number of display devices and systems such as FED, LCD, Laser TV, 3D TV, LED, PDP, OLEDs, flexible displays. He also had initiated various energy devices such as LIB, flexible battery and various types of solar cells (OPV, CIGS, DSSC and quantum dot PVs) at Samsung Electronics and it has been the framework of display and energy business of Samsung.  He also has been leading research on the multi dose X-ray, and Tera Herz imaging system for future Samsung business, as well.