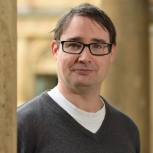 I focus on understanding how to design interactive systems that enable people to be more creative, expressive and satisfied in their daily lives. I build systems that amplifiy people's ability to efficiently interact with computer systems.

Per Ola Kristensson is a Professor of Interactive Systems Engineering in the Department of Engineering at the University of Cambridge and a Fellow of Trinity College, Cambridge. He is a co-founder and co-director of the Centre for Human-Inspired Artificial Intelligence at the University of Cambridge. He is interested in designing intelligent interactive systems that enable people to be more creative, expressive and satisfied in their daily lives. His PhD thesis was on gesture keyboard technology, which he co-invented together with Dr Shumin Zhai in 2001-2002, and in 2007 he co-founded ShapeWriter, Inc. to commercialise this technology. He was the Director of Engineering of this company until it was acquired by Nuance Communications in 2010. ShapeWriter was selected as the 8th best iPhone application by Time magazine in 2008 and won a Google Android ADC50 developer award in the same year. Today gesture keyboard technology, sometimes called gesture typing, swyping or QuickPath, is a ubiquitous mobile text entry method available in most mobile phones and tablets and is currently making its way into emerging technologies, such as virtual and augmented reality headsets. He did his doctoral work at the Institute of Technology at Linköping University, Sweden and at IBM Almaden Research Center in San Jose, California, USA (Ph.D. Computer Science 2007). In 2008-2011 he was a Junior Research Fellow at the University of Cambridge (Darwin College) and in 2011-2014 he was a Lecturer at the University of St Andrews. He is an Honorary Associate Professor (Docent) in Computer and Systems Science at Stockholm University, Sweden and was an Honorary Reader at the University of St Andrews (2014-2017). In 2013 he was recognised as an Innovator Under 35 (TR35) by MIT Technology Review and appointed a Member of the Royal Society of Edinburgh Young Academy of Scotland. In 2014 he won the ACM User Interface Software and Technology (UIST) Lasting Impact Award and the Royal Society of Edinburgh Early Career Prize in Physical Sciences, the Sir Thomas Makdougall Brisbane Medal. He is an Associate Editor of ACM Transactions on Computer-Human Interaction and ACM Transactions on Interactive Intelligent Systems and serves as a Technical Program Co-Chair for ACM CHI 2023, the premier international conference on human-computer interaction.