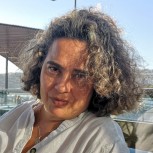 Ruth has been teaching Spanish as a foreign language for over 20 years. A native of Colombia, proud of her Spanish roots and her Latin American origin, she moved to New York after living in Bucaramanga and Bogotá the Colombian capital. She had worked within the Colombian Institute of Higher Education (ICFES) and later on, as an independent journalist for international publications, including a role as a contributing editor to a worldwide travel guide.

In the United States, she redesigned her teaching career and worked in a number of language institutes and within corporations such as NBC, the media group and at the American Museum of National History. After September 11, 2001, she and her family were relocated to the UK. She now teaches Spanish as foreign language within the University of Cambridge at the Engineering Department's Centre for Languages and Inter-cultural Communication and within CULP at the Language Centre, and as a member of MFL team at Swavesey Village College.

Her education includes an honours degree in Education and Modern Languages from the Universidad Industrial de Santander. She subsequently specialised in communications and broadcasting and studied for a Masters degree in Latin American literature. In 2018 she completed a Post Graduate Diploma in Teaching and Learning in Higher Education at the University of Cambridge Institute for Continuing Education.