Dr Hugh Hunt will recreate elements of ‘The Great Escape’ of World War Two live on stage as part of a commemorative show.

It took a year for the RAF airmen to dig the 100 metre-long tunnel, but that was a difficult and dangerous undertaking...We aim to show the enormity and complexity of this engineering-related task with a demonstration of the tunnelling action live on stage.

Sunday 24 March marks the 75th anniversary of the daring escape of 76 RAF airmen from Stalag Luft III, Germany’s infamous prisoner of war camp, via a 100 metre-long tunnel. To mark the occasion, Dr Hunt, Reader in Engineering Dynamics and Vibration, will recreate the digging of the tunnel as part of a live demonstration to explain the engineering and science behind the escape. He will be joined by engineering students Kazuo Newcombe and Suhaa Mahmood, Dr Hilary Costello, and Cambridge resident John Aldridge.

Taking place at the Eventim Apollo, Hammersmith, the demonstration will be streamed to cinemas nationwide on Sunday as part of The Great Escape with Dan Snow, including at two cinemas in Cambridge (details below). The live show, which will feature music and interviews with veterans, will be followed by a gala screening of the re-released 1963 cult film starring Steve McQueen.

To make their great escape on the moonless night of March 24,1944, the prisoners led by Squadron Leader Roger Bushell, made use of (or stole) 4,000 bed boards, 90 double bunk beds, 635 mattresses, 3,424 towels, thousands of knives, forks and spoons and around 1,400 Klim powdered milk cans – used to engineer an ingenious ventilation system.

“It took a year for the RAF airmen to dig the 100 metre-long tunnel, but that was a difficult and dangerous undertaking,” said Dr Hunt. “Sandy soil is fine if it’s a bit damp, but it dries out very quickly and that’s when the walls cave in. They also had to dispose of a ton of sand for every metre they tunnelled. We aim to show the enormity and complexity of this engineering-related task with a demonstration of the tunnelling action live on stage.”

In 2011, Dr Hunt was among a team of experts who were taken back to the site of the escape near Zagan in Poland to excavate, for the first time, the remains of 'George’, a tunnel that was in progress when the war ended, and the famous ‘Harry’ tunnel from which the Allied airmen escaped.

The results of the excavation were broadcast on Channel 4, as part of the programme, ‘Digging the Great Escape’, where Dr Hunt and Dr Costello (one of his engineering PhD students at the time), designed a 10 metre tunnel dug by modern-day RAF pilots, evaluated shoring methods, built a railway track and crafted digging tools and saws fashioned from bits of gramophone players, bunk beds and kit bags. 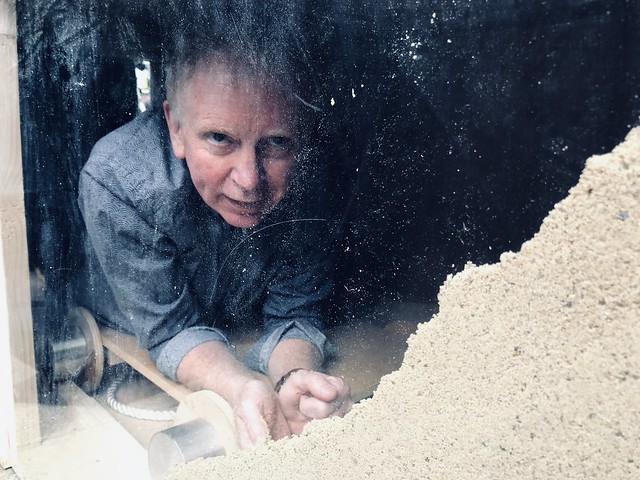 Footage of Dr Hunt on stage, taken from The Great Escape with Dan Snow