Cambridge Engineering alumnus Hal Evans has built a fully-functioning replica of a 1930s Polish cyclometer – an electromechanical cryptologic device that was designed to assist in the decryption of German Enigma ciphertext. The replica currently resides in King’s College, Cambridge.

Manufacturing the cyclometer required an extensive range of machinery and tools. The entire Department of Engineering workshop team were invaluable in the manufacture of the replica, and their engineering knowledge and expertise were an inspiration.

Work on the hardware-based replica began in 2018, as part of Hal’s fourth year Master’s project under the supervision of King's College Fellow and Senior Tutor Dr Tim Flack. The aim was to investigate further into cryptologist Marian Rejewski's cyclometer – an early forerunner to Cambridge University mathematician Alan Turing’s machine, known as the Bombe, which was used to crack the German Enigma code during the Second World War.

Hal said he chose to work on the cyclometer as it was the very first machine used to assist the decryption effort. To his knowledge, the replica is the first fully-functioning hardware-based electromechanical cyclometer to exist since the years preceding the Second World War. The original machines would have been destroyed in 1939 to prevent them from falling into the hands of German invaders.

“Due to the cost and the mechanical complexity of reproducing the original machine, other efforts to create a replica have been software-based to date,” said Hal. “This presented an opportunity to recreate an important fragment of history. It has been a privilege to work on such a unique project which is a fascinating combination of Engineering, History and Mathematics. The replica took just over a year to complete, with generous funding from King's College, which saw the obvious link with the work of one of its most famous alumni, Alan Turing.

"The successes at Bletchley Park are well known in the UK and, while the Polish contribution is certainly acknowledged, I think its exact extent and significance are not widely recognised. Researching into Rejewski and his colleagues, I wanted to discover more about their efforts, and the more I looked, the more interesting the story became – quite how advanced the Poles were in their understanding of Enigma compared to the British in 1939 is remarkable. The Poles were, in fact, the first to crack the Enigma code prior to the start of the War, using various systems, complicated high-level mathematical methods and purpose-built machines. Their work and knowledge proved invaluable, and laid the foundations for the Allies’ later success at Bletchley Park."

Understanding what the cyclometer did

Rejewski’s cyclometer exploited the German's procedure at the time of double encipherment of the Enigma message key, and semi-automated the process for calculating what were known as 'characteristics' for every possible Enigma rotor starting position. There were more than 100,000 of these rotor starting positions, and they each needed their characteristic to be calculated and catalogued in a card index system. The cyclometer therefore eliminated the arduous task of calculating these characteristics by hand.

The machine consisted of, in effect, two interlinked Enigma systems side-by-side – one offset by three positions relative to the other – and 26 lamps and switches to cover the alphabet. On operation, a certain number of bulbs illuminated, indicating the lengths of the characteristics. These were recorded for every single possible rotor starting position to create an immense look-up catalogue. Once this was completed, obtaining the daily Enigma rotor starting settings to decode messages was a simple matter of intercepting enough messages and referencing the catalogue, taking only a matter of minutes.

Attempting this feat using a replica Enigma, which historians know were available to the Polish cryptographers, would have taken around 60 times longer than the nine months that it took with the aid of the cyclometer. This is what motivated Rejewski to design and build the cyclometer – the exploitation of cataloguing cycle lengths would not have been feasible in the timescales required without it.

More information on the historical background of the cyclometer and a complete theory on how it works is available in Hal's thesis submitted for the degree of Master of Engineering – please see the PDF file at the bottom of this page. 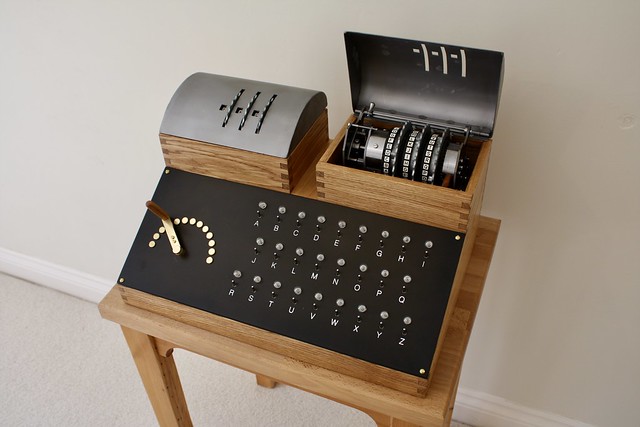 Hal’s faithful reproduction of the original 1930s cyclometer is based on limited surviving historical information regarding the machine’s mechanical and physical design. “While there were some inevitable compromises in manufacturing a machine conceived over eight decades ago, we put considerable emphasis on using genuine parts and materials that would be faithful to the original machine," said Hal. "This included using hard-wired Enigma rotors and reflectors (exact copies of the originals, consisting of Bakelite cores, spring loaded brass pins, epoxy resin rings and alloy finger wheels), silk-insulated wiring and waxed-linen cable lacing throughout, and Ebonite for the front panel, all of which would have been, or were documented to have been, used at the time.

“With the exception of the Enigma rotors and reflectors (sourced from a specialist machinist in Germany), virtually all of the components of the replica were manufactured from scratch in the Department of Engineering's workshops by myself and the technicians. Manufacturing the cyclometer required an extensive range of machinery and tools, from lathes to milling machines, and rapid prototyping machines to water-jet cutters. The entire workshop team were invaluable in the manufacture of the replica, and their engineering knowledge and expertise were an inspiration.

"I’m particularly grateful to Mr Alan Jackson and Mr Steve Robinson for their patient guidance and enthusiastic encouragement in the workshop. Many thanks also to Mr Alistair Ross for his kind co-operation and all his hard work in organising the workshop. In addition, I would like to thank: Phillip Fernandez who provided the generous funding through King’s College that made the full potential of the project achievable; Dr Tim Flack for giving me the opportunity and inspiration to undertake this project for my Masters and to complete it after graduation; Lorraine Headen, Development Director at King's College, for her continued enthusiasm and kind support throughout; and to Paul Zetzmann for the calibre of his Enigma rotors and reflectors and for his excellent collaboration.”

So how does Hal feel about bringing the cyclometer back into existence in this way?

Hal said: “Bringing back to life a machine that has not existed for the past eight decades is not only a thoroughly fulfilling achievement, but most importantly, it is a wonderful opportunity to acknowledge the Polish codebreakers and their pioneering techniques in the lead up to the Second World War. This would not have been achievable without the generous funding from King's College, Cambridge, and also for the hard work of the entire Department of Engineering workshop team, for which I am exceptionally grateful.”