The Materials Research Society (MRS) has recognised Professor Andrea Ferrari, Director of the Cambridge Graphene Centre, as a 2016 MRS Fellow.

Professor Ferrari was cited “for seminal research on Raman spectroscopy of carbon materials and leadership role in the development of graphene and other two-dimensional materials in Europe and worldwide.”

The honour of MRS Fellow is bestowed upon outstanding members of the organisation in recognition of their sustained and distinguished contributions to the advancement of materials research. This year, 14 MRS members were inaugurated as Fellows – Professor Ferrari was the only one honoured out of Europe.

Professor Ferrari serves as Director of the Cambridge Graphene Centre and of the EPSRC Centre for Doctoral Training in Graphene Technology. After a successful two-and-a-half years as Chair of the Executive Board of the 1 billion-Euro Graphene Flagship, Professor Ferrari took on the new position of Chair of the Management Panel of what is Europe’s biggest research initiative with the aim of taking graphene from the realm of academic laboratories into European society over the next 10 years.

The MRS is an international organization of almost 16,000 materials researchers from academia, industry and government, and works to promote the advancement of interdisciplinary materials research to improve the quality of life. MRS members come from the full spectrum of materials research, including physics, chemistry, biology, mathematics and engineering. 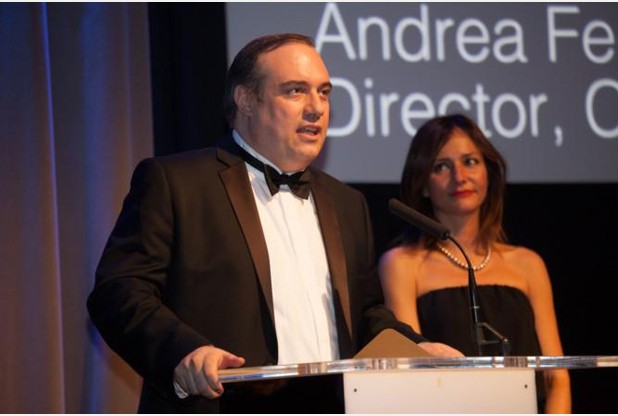 Earlier this month, Professor Ferrari was presented with an award at a gala organised by the PrimiDeci Society UK, which celebrates the achievements of the 200,000 Italians living in the UK. Ferrari stood among 10 individuals of Italian origin ‘whose professional achievements champion awareness of the global Italian community and inspire young generations of Italians and British-Italians to excellence.’

Professor Ferrari was listed in Thomson Reuters Most Influential Scientific Minds in 2014 and 2015 in the Materials Science category and is a Highly Cited Researcher. He is a Fellow of the Institute of Physics. He was recently appointed as chair of the Management Panel of the 1 Billion Graphene Flagship, Europe’s biggest research initiative with the aim of taking graphene from the realm of academic laboratories into European society over the next 10 years.