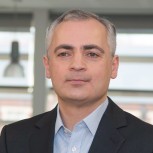 Dr Cirak's research is focused on computational modelling and analysis of light-weight structures originating from a wide range of applications, including structural engineering, aerospace and marine engineering. Specific areas of research emphasis include:

In terms of computational methods development two overriding themes throughout his research are:

Current research interests include multiscale shape and topology optimisation for lightweighting and fluid-structure interaction with application to biomimetic energy harvesters.

Prior to Cambridge Dr Cirak was a Senior/Associate Scientist at the Center for Advanced Computing Research (CACR) at the California Institute of Technology. He has a PhD in Computational Structural Mechanics from the University of Stuttgart and was a Postdoctoral Fellow in Aeronautics and Computer Science at the California Institute of Technology.