The Department of Engineering’s Dyson Centre for Engineering Design celebrated its opening with a day of demonstrations, experiments and other activities.

Cambridge engineering students were invited to tour the Centre and engage in several hands-on projects including a competition to build an automatic musical instrument from salvaged parts and a challenge to construct the strongest bridge using only cardboard.

The recently completed facility, built with a £2.65 million grant from the James Dyson Foundation and matched funding from the Higher Education Funding Council for England, is a new space for engineering students to work on individual projects. “It’s a facility aimed to encourage students to do more design, creation and innovation work,” said Dr Richard Roebuck, Senior Design Engineer and Manager of the Dyson Centre. “They’ll come in and try to realise their ideas … try to put into practice some of the theoretical ideas they’ve heard in their lectures.”

The Dyson Centre is equipped with tools for prototyping and making – from traditional hand- and machine-tools to modern computer-controlled machinery, 3D printers and laser cutters. It includes modern workspaces where students can develop their creativity and enthusiasm for engineering. The Engineering Library interior was also rebuilt and a glass link bridge connects the learning environments of the Library to the Dyson Centre.

Cambridge TV was on site and reported on the day’s events. 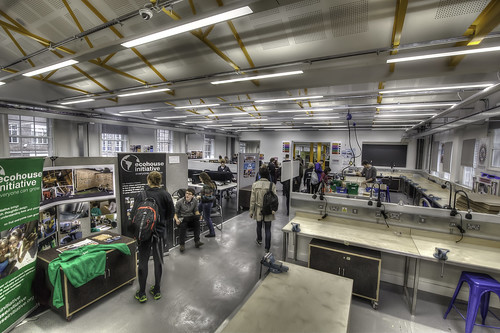