Professor Johnson earned his BSc and MSc degrees at the University of Manchester, following which he spent five years in industry at Rotol working on vibration and propeller research. While Assistant Lecturer at the Manchester College of Technology, he earned his PhD on ‘surface interactions between elastically loaded bodies under tangential forces.’

His time at the University of Cambridge began in 1954 and he was appointed Professor of Engineering in 1977. In his time at Cambridge, Professor Johnson studied contact mechanics, examining concepts such as rolling contact with creep and spin. As the Institution of Mechanical Engineers writes, his work was characterised by elegant experiments, skilful analyses and insightful explanations of observed phenomena. 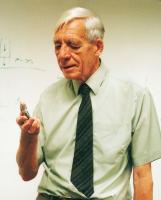 Professor Johnson was elected as Fellow of the Royal Society in 1982. Regarded for his expertise in the field, he authored Contact Mechanics in 1985 and was awarded the Tribology Gold medal that same year. He also received the ASME Mayo D Hersey award in 1991, the Royal Society Medal in 2003, and the Timoshenko Medal, one of the highest honours in the field of applied mechanics, in 2006.