Student projects such as Full Blue Racing and Cambridge University Eco Racing have had to build in any area they could find – with no easy storage solutions for cars between competitions – until a generous donation from the Oatley family has provided for a dedicated space for these projects.

We wanted to thank the Engineering Department at Cambridge for what they did for our son, Joe, setting him on a brilliant career path.

The Oatley Projects Garage officially opened in a ceremony on 15 February by benefactors Geoff and Jean Oatley. Also present were son Joe Oatley, Department of Engineering graduate (1987) and now CEO of Cape plc., international provider of support services to the energy and mineral resources sectors; Joe’s wife Jane, graduate of the Department of Veterinary medicine; and several other family members.

The garage’s electric door opened to reveal ‘Evolution’ the Eco Racing Team’s solar car returned from the World Solar Challenge in Australia, alongside the Full Blue Racing Team’s FBR16 (Formula 1 car). The student team members were able to thank Geoff and Jean personally, and explain how valuable the new garage is to their projects; this is their first ever garage area on site – it will save the project teams huge amounts of time and money.

The Oatley grandchildren Sam, Sophie and Patrick tried out both cars and later built their own mini solar cars in the Dyson Centre for Engineering Design under the supervision of Outreach Officer Maria Kettle.

“We wanted to thank the Engineering Department at Cambridge for what they did for our son, Joe, setting him on a brilliant career path,” said Geoff and Jean. Their gift not only provides for the cutting-edge garage-cum-workshop for student projects but enables the Department’s outreach work with the local community. 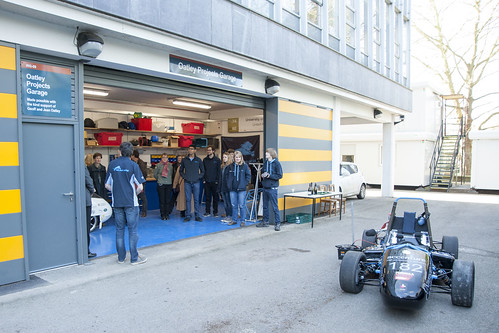 The Oatley family in front of the garage